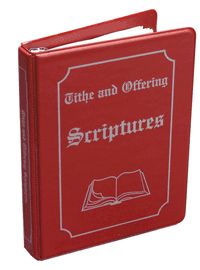 “The red bible” is an interesting term used to describe the words of Christ in the new testament scriptures. I have repeatedly mentioned that it’s important to read the entire chapter or book to get a full picture of the situation. In the case of the gospels, it’s important to not just read the book, but compare the other Gospels because they complement each other. The synoptic gospels of Saints Matthew, Mark & Luke are full of similarities and the gospel of St. John the Evangelist brings to light deeper things about Christ that the others either mentioned in passing or didn’t mention at all for many debatable reasons.

The Christ and the Tithe by Matthew

The famous woes to the Scribes and Pharisees is an interesting section of Jesus accusing this elite Jews of many wrong doings (cf. Matt.23). At a point in verse 23, Jesus said this about tithes: ‘Woe to you scribes and Pharisees, Hypocrites! For you pay tithes…and have neglected more important matters of the law: justice and mercy and faith”. I wonder if Jesus sounds familiar to you? Imagine with me if Matthew had written this in the same style Malachi had written. It would involve Jesus wrestling them about perverting justice (lies), not being merciful to the poor among them (filling up the store houses) and not having faith (believing in the God of the Heavenly Armies). But they will answer him by saying, at least we’re better than our ancestors, we pay our tithes. But Jesus would shoot back that what they have done was good but the more important aspects were being ignored. But Matthew didn’t mention anything about feeding the poor in that place so it’s safe to assume from Matthew that Jesus wasn’t talking about the poor in his tithing discourse but insisted on the payment of the tithe. It’s easy in our modern English language to ignore the meanings of words like justice and mercy because they have become common political and moral terms rather than actual spiritual goals. It was when I looked up just how Luke covered this same discussion that I reexperienced my storehouse moment more vividly. Exciting!

The Christ and the Tithe by Luke

I want to first acknowledge St. Augustine of Hippo (354 -430AD), my role model in searching the scriptures, in whose work on the Sermon on the New Testament, Homily 56, I discovered this revelation in Luke’s Gospel account.

Here Luke tells us a story of how Jesus came about to be in that position of wrestling with the elites. Christ was given a special invite to the house of this Jewish elite and what ensued lead to the hatred Jesus suffered from the Scribes and Pharisees (cf. Luke 11:37-53). It started with their disgust at the Christ’s seemingly lack of hygiene. Knowing this arrogant piety in them, I mean He knows all things, He began to bash them with woes because of their dirty hearts, including the very same words Matthew used (Luke 11:42; cf. Matt. 23:23). But just before he did that, I observed my store house moment in his words. “Give alms of such things as you have, then your heart would indeed be clean”. I read this in NKJV, KJV, NIV, CPD and MSG bible versions just so I can be sure that Christ has first told these Pharisees that by providing for the poor among them, they would indeed have truly clean/perfect hearts but rather they give tithes and ignore more important things. This act is an integral part of God’s true justice.

Luke had brought to light something quiet about the scenario that Matthew had ignored. Perhaps Matthew, being in Jerusalem and writing an account to Jew, expected his fellow Jewish Christians to understand that love for the needy was more important than other laws. Luke, on the other hand, knew he was writing to Theophilus (Gk. Lover of God) who was definitely non-Jewish. He was writing to we lovers of God who never knew the importance of the law so that we can have just as much insight as a Jew concerning the issue Jesus cursed the religious bigots about.

I took a break to soak in just how important tithing was and just how much Christ fulfilled it by overcoming our subjugation to the bondage of the law and filling us with grace to do above and beyond this. My head started to spin ecstatically. I hadn’t been under the bondage of paying tithes by any law but I had never been able to successfully have a corporal contact with the poor. I mean, I give to their cause because it’s easier for me to give people who would give them. But I have only given them the cheapest of my treasures: my money. I’ve almost never directly given them my food, my clothes, my hugs or even a common handshake. I have never given them the most precious thing I have which is my time on Earth. I realized I was way worse than a non-tither because I really can’t remember how long it’s been since I did a single corporal work of mercy as is in the Commandments of the Catholic Church I totally believed in. I was disappointed with myself for all the intelligent excuses I come up with for not doing the most important reason for God blessing me. Once again, I felt the gospel humiliate me in all versions of hidden pride I hadn’t really noticed till now. Forgive me O Lord, for I have neglected to feed the sick, the hungry, those in captivity and even the foreigners in our midst; Help me find the grace to see you in them rather than only see the laziness of those who seem to exploit begging as a profession. In nomine Patris, et Fili, et Spiritus Sancti. Amen!” I prayed.

Please follow us on all our social media platforms @Godlywomenarising

We would be posting the concluding parts from Tomorrow till the end of the week and from Monday we will get back to our usual Monday posts. Guess what we have something interesting planned for Monday. Stay Tuned.